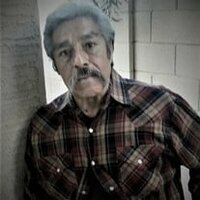 Gerardo Z. Baldenegro was born to Isidro and Maria Juana Baldenegro on October 3, 1942. He was born in Mexico City, D.F. and raised in Mexicali, Baja California. Gerardo was known to many of us as "Jerry" or "El Chicali". He loved to be the light of the party by dancing and aspired to be a child at heart until the end. His mustache was his trademark along with the substantial amount of hairspray-He couldn't go anywhere with flat hair. The moments he would give hugs you would instantly get a huge whiff of Old Spice, his go-to cologne. He would constantly listen to Elvis Presley on repeat along with boleros, rancheras, and oldies. He stayed true to his heritage and dressed dapper daily, including his cowboy "botas". Gerardo was a skilled tailor for over 50 years. He made beautiful dresses for special occasions and dapper men's suits. Along with being a practiced sketch artist, he was also an efficient carpenter and worked at Oak Craft for many years. He was an avid reader and loved obtaining new knowledge about the entirety of everything life had to offer. Gerardo is survived by his three children: Gerardo Baldenegro, Leonardo Baldenegro, and Mayra Baldenegro-DaSalla. His five grandchildren: Rosita, Fernanda, Barbara, Celeste, and Andrew- As well as his two great grandchildren: Anna Victoria and Lenin Vladimir. He also lives on through his sister, Cecilia Gardella and a host of nieces and nephews. Rest in Peace- May he live on through all of us and the life experiences that have yet to come.